The Outward Urge (with Lucas Parkes)

The Outward Urge is Wyndham’s most underrated work, and is sadly now out of print book. It is largely set in Space, but with much earthbound relevance, as Wyndham explores how early inter-planetary travel may shape global politics. Despite the absence of any alien opponents in Outward Urge, Wyndham was reluctant to return to Space. This may well stem from embarrassing memories of his earlier pre-war Sci-Fi projects. Wyndham even fabricates a co-writer (Lucas Parkes is simply a combination of two of his many middle names) in order to put a little distance between himself and the project.

Indeed Wyndham seems especially cautious about the critical reception in the British market, and is quoted as saying: 'Your English reader does not care for the idea of spaceships. I don't know quite why he does. Your American reader loves spaceships. But in England you don't.' Wyndham's assertion was, at best, correct only in the short-term. Not only did North American imports such as Star Wars attract a huge following in UK, but during the Sixties and Seventies there were several British galactic adventures such as Doctor Who, Blake's 7, and Space 1999.

Either way, the book still resonates today, in a World where cynics are determined to knock space travel. The account of the Troon family’s symbiotic relationship with the exploration of the Solar System begins in 1994, when G.M. Troon joins the team charged with establishing Britain’s first Space Station. The story then progresses to the Moon, Mars, and Venus. There is an ambitious time frame spanning two centuries. The opening hundred years reflect the growing contemporary sense that Britain was a fading power, as she attempts to compete with the USSR and the USA in the Space Race. While the next century sees the balance of world power shift, for reasons that will become apparent. Originally printed in 1959 in four chapters, a short and worthwhile concluding fifth chapter was added to editions published after 1961. Wyndham employs the third person narrative for chapters 1, 2, and 4, but the first person for the remaining two parts.

Originally printed in 1959 in four chapters, a short and worthwhile concluding fifth chapter was added to editions published after 1961. Wyndham employs the third person narrative for chapters 1, 2, and 4, but the first person for the remaining two parts.

It seems hard to believe that Wyndham was not, in some way, inspired by the scientific developments of the 1950s to return again to the theme of Space exploration. The previous decade had seen a rapid advancement in rocket technology, and by 1957 Moscow had launched the first satellite, Sputnik. By the end of that year animals including the bitch Laika, had demonstrated that survival in Space was possible. The Outward Urge was published two years before cosmonaut Yuri Gagarin was sent into orbit. Wyndham died in Spring 1969, just months before the Moon Landing.

Time has uncovered a couple of scientific inaccuracies. For example, Wyndham portrays Venus as a rain-sodden marsh populated by unspectacular swamp fauna. He was writing shortly before American and Soviet probes explored the area. Consequently he was unaware that plant life as we know it, could never establish itself on the acrid Vensuian wastes. Wyndham also fails to foresee the collapse of the Soviet Union, though that would have been a remarkable prediction at the height of the Cold War.

Wyndham feels it necessary to detail the construction and use of spacecraft such as the platforms that are used as transport on the Moon and Mars. Again the author was aware that some of his readership would be relatively new to Science Fiction, and so was perhaps unsure how much the reader needed to be told. Nowadays, even non-SF readers are more familiar with the concepts of Space Travel, so as a result the technological descriptions can seem a little tired.

It was only with the advent of internet shopping that I was able to successfully track this book down, as it has been out of print for several years. I had feared that this was an indication of quality, but on the contrary The Outward Urge, is a well-written and intelligent book. The action begins in 1994, and moves forward fifty years a time, until 2194. The chapters could all be read as individual novellas, but are all interlinked. As the balance of power shifts to Brazil (and to a lesser extent Australia), space travel continues with Mars being visited in 2094.

I think the most powerful episode of the book is Mars, which centres around the Martian nightmare of Capitão Geoffrey Montgomery Trunho. (Following the 'Great Northern War' the Troons move to the new Superpower of Brazil, changing their name along the way). The inaugral Brazilian mission to Mars, meets with disaster, when the Figarão is badly damaged whilst landing on Mars, killing one of the three crew members. Trunho finds himself stuck on the maddeningly quiet Red Planet with a brain-damaged companion whose head injury has convinced him that Trunjo is a Martian. Despite the very real danger of being murdered, the protaganist still prefers the company of the unhinged Raul, to the alternative of years in solitude on a lonely planet.

In the latter stages of the story, Wyndham also brings some fascinating ideas into play. The rise of the Space Force that supercedes the rivals powers on Earth, and declares independence, is an especially interesting one. As is the final short chapter The Emptiness of Space: The Astriods 2194 in which George Troon loses his 'soul' in Space following decades in suspended animation, and now lives out a hollow existence in New Caledonia (the French-speaking island that is owned by Space, and is the main launching pad for interplanatery voyages).

Excerpt from The Outward Urge

From the Second chapter The Moon....

'Is your standby with you?'
'Yes Sir.'
'Tell her to search for the Russian intercom wave-length. It's something a little shorter than ours as a rule. When she finds it, she is to hold it until further notice. Does she speak Russian?'
'Yes, sir.'
'Good. She is to report at once if there is any suggestion of hostile intention in their talk. Cut me in on the guard-link again now.'
The two platforms continued smoothly towards them, dropping on a long slant as they came. The sergeant's men were prone, with their guns aimed. They were deployed in a wider crescent. In the middle of it stood a lone figure in a suit of vivid magenta, his gun slung, while he beckoned the platforms in with both arms. the platforms slowed to a stop a dozen yards short of the signaller, at a height of some ten feet. Then, with their jets blowing dust and grit away from under them, they sank gently down. As they landed, the space-suited figures on them let go of their holds, and showed empty hands.
'One of them is asking for you, sir, in English,' Control told him.
'Cut him in,' Troon instructed.
A voice with a slight foreign accent, and a trace of American influence, said:
'Commander Troon, please allow me to introduce myself. General Alexei Goudenkovitch Budorieff, of the Red Army. I had the honour to command the Moon Station of the USSR.'
'Commander Troon speaking, General. Did I understand you to say that you had that honour?'
He gazed out of the window at the platform, trying to identify the speaker. There was something in the stance of a man in a searing orange suit that seemed to single him out.
'Yes, Commander. The Soviet Moon Station ceased to exist several earth-days ago. I have brought my men to you because we are - very hungry.'
It took a moment for the full implication to register, and then Troon was not quite sure.
'You mean you have brought all your men, General?'
'All that are left, commander'.
Troon stared out at the little group of nine men in their vivid pressure-suits. The latest Intelligence Report, he recalled, had given the full complement of the Russian Station as three hundred and fifty-six. He said:
'Please come in General. Sergeant Witley, escort the General and his men to the airlock.' 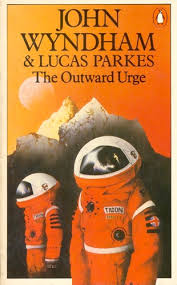 Is Outward Urge your favourite Wyndham novel? Why not cast your vote on the WyndhamWeb polls?