THE ‘New Race’ theme is a familiar one to Wyndham-aficionados, but this time the extraterrestrials are benevolent. However, this does not mean that things run entirely smoothly for Matthew, the boy who is possessed by a sort of alien fairy godmother. Suddenly Matthew begins to learn skills he never before possessed, yet this also brings great worry on his parents who are gradually convinced that Chocky is no imaginary friend.

As in The Midwich Cuckoos, the narrator is not the protagonist, in this case it is Matthew’s father. He and his wife are aware that powerful forces are beginning to take an interest. Along the way, Wyndham mulls over the energy crisis that will likely engulf the World sooner or later. As Chocky ‘herself’ observes:

‘Most of your power is being used to build machines to consume power faster and faster, while your sources of power remain finite. There can only be one end to that’.

If I have one criticism of Chocky it is that Wyndham (by this point in his sixties and childless) doesn’t really seem to empathise with a twelve-year old boy. I’m sure even by the 1960s most lads of that age were not calling their mothers ‘mummy’ or fathers ‘daddy’. Matthew does not seem to have quite the believability of David and Rosalind from The Chrysalids.

Perhaps that is why the 1984 ITV programme for children was so effective. Having child actors, it is a little cheesy at times, however, it is an extremely thoughtful series, and though updated to the 1980s, remains probably the most faithful of any film or TV production of a John Wyndham book (See Vision).

Worryingly for Wyndham purists, Steven Spielberg acquired the rights to the book in 2008, it is understood with the intention of directing the feature himself. Cue the standard Hollywood appropriation of British culture, as the setting moves to California, and all traces of proper English are eliminated for fear that an American child might actually hear a word in its' unadulterated form. Nevertheless as long as Spielberg can resist the temptation to make the dialogue too contrived dialogue it may bring Wyndham's work to a wider audience, which can only be a good thing.

Chocky across the Radio-waves

Other Adaptations of Chocky include three BBC Radioplays. First published as a novella in Amazing Stories a US Science-Fiction magazine in 1963, it was a further five years before the full-blown novel Chocky was published. A year before the hardback release came a rendering for BBC radio. This version is less than an hour long covering the basic plot, and is available for free download. The 1990s radio adaptation can be purchased in audiobook form; the most recent broadcast came in 2008. 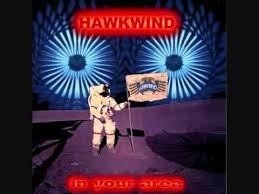 There is however one further Chocky audio reprise. In 1979, Prog Rock band Hawkwind, whose psychedelic sound was clearly Sci-Fi influenced, quoted the book in their 1979 album track The Nazca. 'But intelligent life is so very rare, the rarest thing in creation, but the most precious, it is the only thing that gives meaning to the universe. Without it nothing begins; nothing ends.' 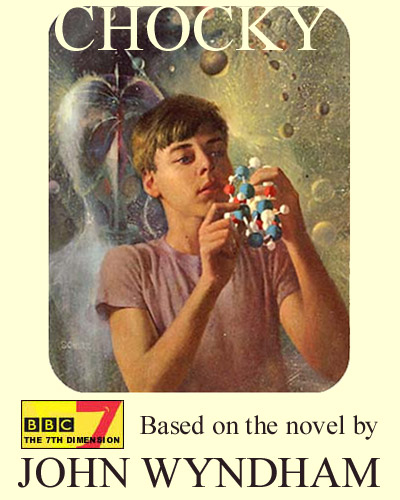 I picked up a pencil and scribbled on a newspaper margin:

'What do reckon that means, Matthew?' I asked.
He glanced at it.
'A hundred and seventy-nine,' he said.
'It seems complicated when you can just write 179,' I said. 'How does it work?'
Matthew explained the binary code to me, much as Trimble had.
'But do you find that way easier?' I asked.
'Only sometimes - and it does make division difficult,' Matthew told me.
'It seems such a long way round. Wouldn't it be simpler to stick to the ordinary way? I suggested.
'Well, you see, that's the way I have to use with Chocky because that's the way she counts,' Matthew explained. 'She doesn't understand the ordinary way, and she thinks it's silly to have to bother with ten different figures just because you've ten fingers, when all you really need is two fingers.'
'I continued to look at the paper while I thought how to go on. So Chocky was in on this - I might have known....
'You mean when Chocky counts she just talks Ys and Ns?' I inquired.
'Sort of - only not actually. What I mean is, I just call them Y and N for Yes and No, because it's easier.'

I was still wondering how best to handle this new incursion of the Chocky element, but apparently I looked merely baffled, for Matthew went on to explain, patiently.
'See Daddy. A hundred is YYNNYNN and because each one is double the one on its right that means, if you start from the right hand end 1 - No, 2 - No, 4 - yes, 8 - No, 16 - No, 32 - yes, 64 -yes. You just add the Yeses together, and it's a hundred. You can get any number that way.'
I nodded.
'Yes, I see. But tell me where did you first come across this way of doing it?'
'I just told you Daddy. It's the way Chocky always uses.'
Once more I was tempted to call the Chocky bluff, but I put a thumb on my impatience. I said, reasonably:
But she must have got it from somewhere. Did she find it in a book, or something?'
'I don't know. I expect somebody taught her,' Matthew told me vaguely.
I recalled one or two other mathematical queries that Trimble had raised, and put them, as far as I understood them. I was scarcely surprised to learn that they, too, were devices that Chocky was accustomed to use.
So there we were, at an impasse. I was just about to end the rather fruitless session when Matthew stopped me, disturbingly. He emerged from silent reflection, as if he had made up his mind to something. With a somewhat troubled expression, and his eyes fixed on mine he asked:
'Daddy, you don't think I'm mad do you?'
I was taken aback. I think I managed not to show it.
'Good heavens, no. what next? What on earth put such an idea into your head?'
'Well, it was Colin, really.'
'You haven't told him about Chocky?' I asked, with a quickening concern.
Matthew shook his head.
'Oh, no. I haven't told anyone but you, and Mummy - and Polly,' he added a little sadly.
'Good,' I approved. If I were you I'd keep it that way. But what about Colin?'
'I only asked him if he knew anyone who could hear someone talking kind of inside himself. I wanted to know,' he explained seriously. 'And he said no, because hearing voices was a well known first sign of madness, and people who did hear them either got put in asylums, or burnt at the stake, like Joan of Arc. So I sort of wondered....'

Is Chocky your favourite Wyndham novel? Why not cast your vote on the WyndhamWeb polls?