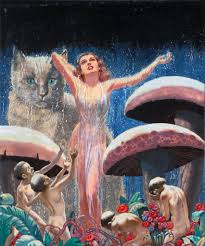 THE NOVELIST'S first published full-length effort came in 1935. (Late 20th Century reprints declared them 'John Wyndham writing as John Beynon', whereas the 2016 Penguin reprint ditched Beynon altogether). The book is not pure science fiction, and might be seen as embryonic Logical Fantasy. It opens in September 1964, so as with all books set in the near(ish) future it inevitably gives the effect of datedness to the reader a few generations down the line. 'Rocket planes', rather than jets, are replacing propeller-driven aeroplanes. France still owns Algeria, Italy controls Libya, and it is also mentioned in passing that Warsaw was an easy holiday destination, rather than behind an iron curtain. Conversely Wyndham does correctly predict the reign of Elizabeth II, despite writing before the Abdication Crisis.

The crux of the plot revolves around the crash of Mark Sunnet's Rocket-plane the Sun Bird into the 'New Sea' (a vast artificial salt-water reservoir, created by the French and Italians, in order to transform the Sahara into a rainy region). The Sun Bird also carries Mark's new-found girlfriend Margaret, and then a cat named Bast. This feline plays an important part in proceedings. The floating aircraft is then sucked into a whirlpool, thence to a huge complex of underground caverns inhabited by pallid pygmies, a multinational group of outsiders who have accidently arrived through various forms of misadventure, and 'natives' (the offspring of those normal-sized folk trapped underground), the latter two social groups (and a handful of troublesome pygmies) live in the extended prison caverns. The subterranean people are in decline both in terms of population and knowledge, worship Egyptian Gods, and survive largely on giant mushrooms.

A typically nuanced 'us v them' Wyndham scenario unfolds. The Secret People are fighting for their survival as are 'our side'. That Mark is imprisoned and not killed despite the fact he shot at least one dead, attests to the pygmies religiously-inspired aversion to needless death (though they regard mortality with a certain nonchalance). The troglodytes have not fought seriously amongst themselves in living memory. Even the villain of the piece, Miguel, has occasional glimmers of remorseful humanity. All-in-all Secret People is a remarkably imaginative read, notwithstanding the odd moments of implausibility; a very convenient aeroplane crash, the amazing speed with which Margaret learns the pygmy language, and inexplicable roof lights.

Some readers may be uncomfortable with the politically incorrect language on display, especially in connexion with the character Zickle, whose name is often superfluously prefixed with negro. Zickle speaks in pidgin English 'him scare Devils' and 'yes, me gottim', being examples of his lines. The American Smith, essentially one of the heroes, and a firm friend and ally of Zickle, casually refers to him as a 'nigger' on more than one occasion, though not in a purposefully derogatory way. Since Wyndham was generally a very broad-minded person, I for one am prepared to overlook these old-fashioned moments of linguistic tastelessness.

Bizarre quote: 'The idea of world redemption through the R.S.P.C.A. was novel, even if it inspired little faith'.

Erudite quote: 'For all races the very rare is a matter either for awe or mirth'. 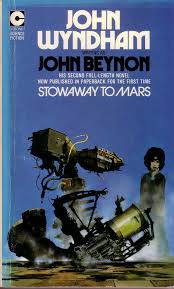 Stowaway to Mars (AKA Planet Plane and Stowaway)

Curtance is enticed to Mars by the Keuntz Prize, a Turing-style incentive to push boundaries. However, the five million dollars on offer does not seem likely to reimburse the costs of a mission to Mars. Interplanetary travel is envisaged as a gentleman's pursuit, rather than the preserve of superpowers. It is not giving too much away, to state that the stowaway is a woman. As is noted in other parts of this website John was anything but sexist and Joan (note the choice of name is that of his long-term partner, and future wife) is not the sort of lead one would expect from many male writers of the 1930s, though he overdoes the supposed female fear of machines. The men take a contemporarily chivalrous attitude to the stowaway. 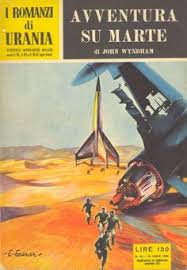 Naturally inaccurate predictions of the future abound but are themselves an interesting reflection of the times; some in matters of astronomy, and others more Earthbound. For instance the notion that the Rocket's windows must to be shuttered when the Sun shines in for fear of being boiled alive, seems to my untrained mind not quite right. A highly optimistic twelve weeks is all that is needed to reach Mars, and the planet is partially covered not only in vegetation*, but canals, that would surely be frozen. Yet intrigingly the Moon is orbited, though not landed, in 1969, the year of Apollo 11.

Closer to home Nazi Germany is still around in the 1980s, and the pound-to-dollar exchange rate is very much of the Gold Standard era. Though, in fairness to the writer, he again correctly assumes that Elizabeth II would reign as queen, with Mars being claimed in her name as head of the British Commonwealth. (George V was king at the time of writing so he may even have been predicting a different Elizabeth). The premonition that the Soviets would be a leading player in Space also proved correct, as did the rise in popularity of television.

Best moment of lampoonery: The presence of gutter hacks from the Daily Hail and Daily Excess tabloids.

Wyndham also had two commercially unsuccessful detective books published in the late 1930s. The few surviving hardback copies of Foul Play Suspected retail for a minimum of Â£500, sadly beyond the means of this WyndhamWeb editor. So the review will have to wait until I am a richer reader.